Steadfast in the Storm: Hong Kong Towards 2017 and Beyond

Two thousand and fourteen has been a momentous year in two respects. It marked the 25th anniversary of the June Fourth government crackdown on the 1989 Democracy Movement, a year in which the persistence of the Tiananmen Mothers and others calling for justice reminds us that we must not remain silent about ongoing government impunity for past violence against citizens. The year also saw the surging forth of a people’s political consciousness, articulated in a powerful civil disobedience movement to protect the future of Hong Kong. This peaceful mass mobilization was not only the most sustained in Hong Kong’s history, but also unique in its community-building spirit and abundance of artistic energy.

The 75-day protest, called the Occupy Movement or Umbrella Movement, was triggered by the August 31, 2014 Decision by the Chinese National People’s Congress that would limit the election of the next Hong Kong Chief Executive by “universal suffrage”—as previously pledged by the Chinese government—to voting for only two or three candidates vetted and approved by Beijing. The proposed plan generated widespread concerns that it would undermine genuine universal suffrage and threaten the preservation of Hong Kong’s way of life and core values, as promised in the 1984 Sino-British Joint Declaration and Hong Kong’s Basic Law. While Hong Kong’s government essentially acceded to the plan, its people, led by university students, who were soon joined by a citizenry of different ages, took to the streets to voice their dissent. 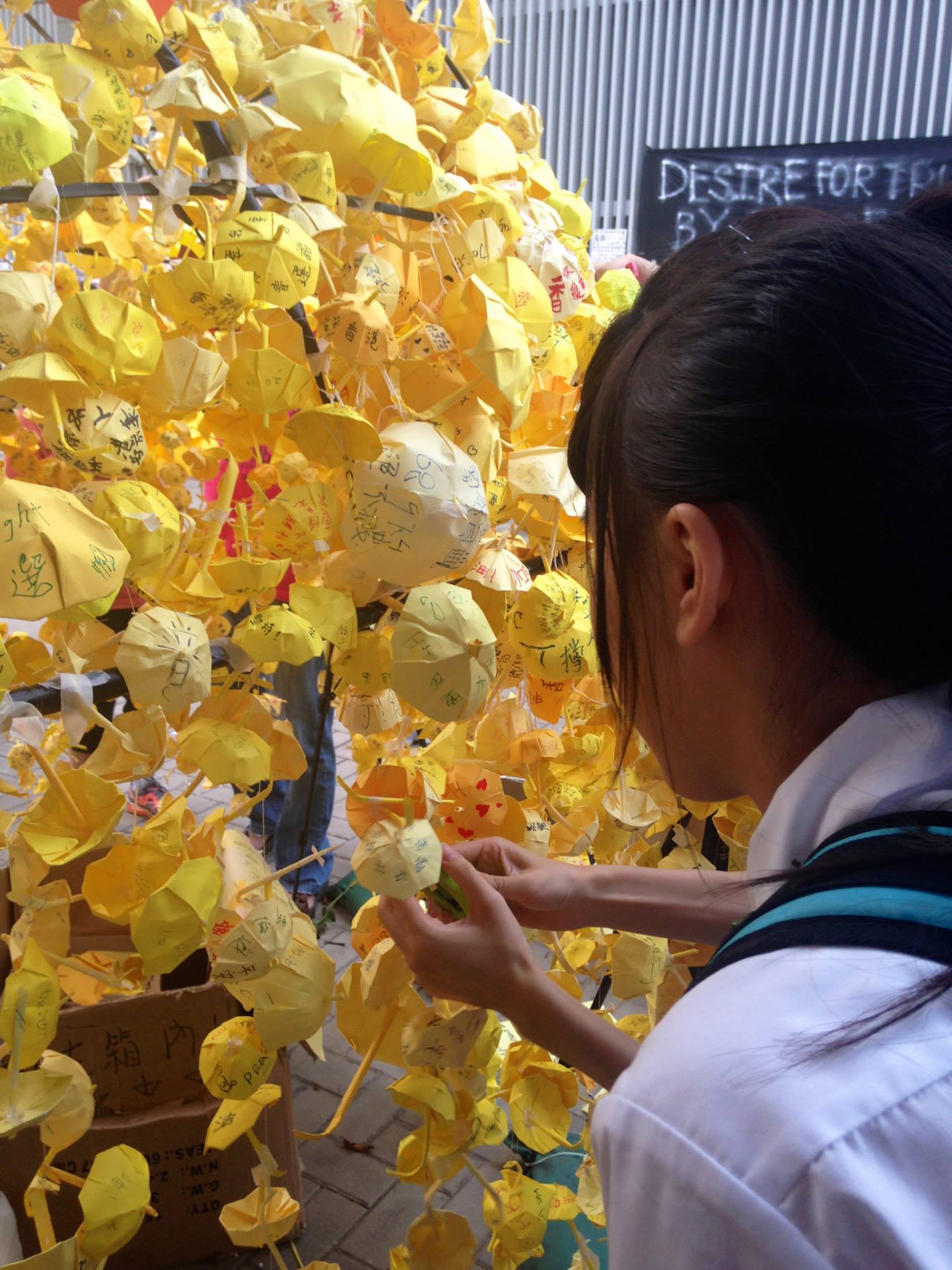 Despite the police and thug violence and amid intense debates, an organic community emerged in the occupied sites, spreading throughout Admiralty, Mong Kok, and Causeway Bay. It was composed of special public spaces for giving and sharing, where restaurants donated food to protesters and people invited strangers to sit down and eat, where workers made wooden study tables for students and volunteers gave free academic lessons, where five-year-olds came with their mothers to make yellow ribbons, where an elderly man urged youngsters to take the oranges he gave out from a cart he was pulling, and where songs were written and sung. It was a diverse, vibrant community of students, parents, teachers, professionals, construction workers, artists, writers, and others. Instead of market exchanges and interactions, these were spaces where time, resources, ideas, humor, and creativity were freely shared—in a gift economy.

After the final government clearance of the protest areas, Hong Kong’s people still waited for their government to do its job, that is, offer constructive ways forward to address the concerns and demands of the people. In contrast to this governance failure, the student leaders and others are expanding their outreach to the general Hong Kong public to try to advance discussion and understanding of universal suffrage. They organize fluid and decentralized citizen actions in small groups such as shopping and Christmas caroling, so as to continue the movement. 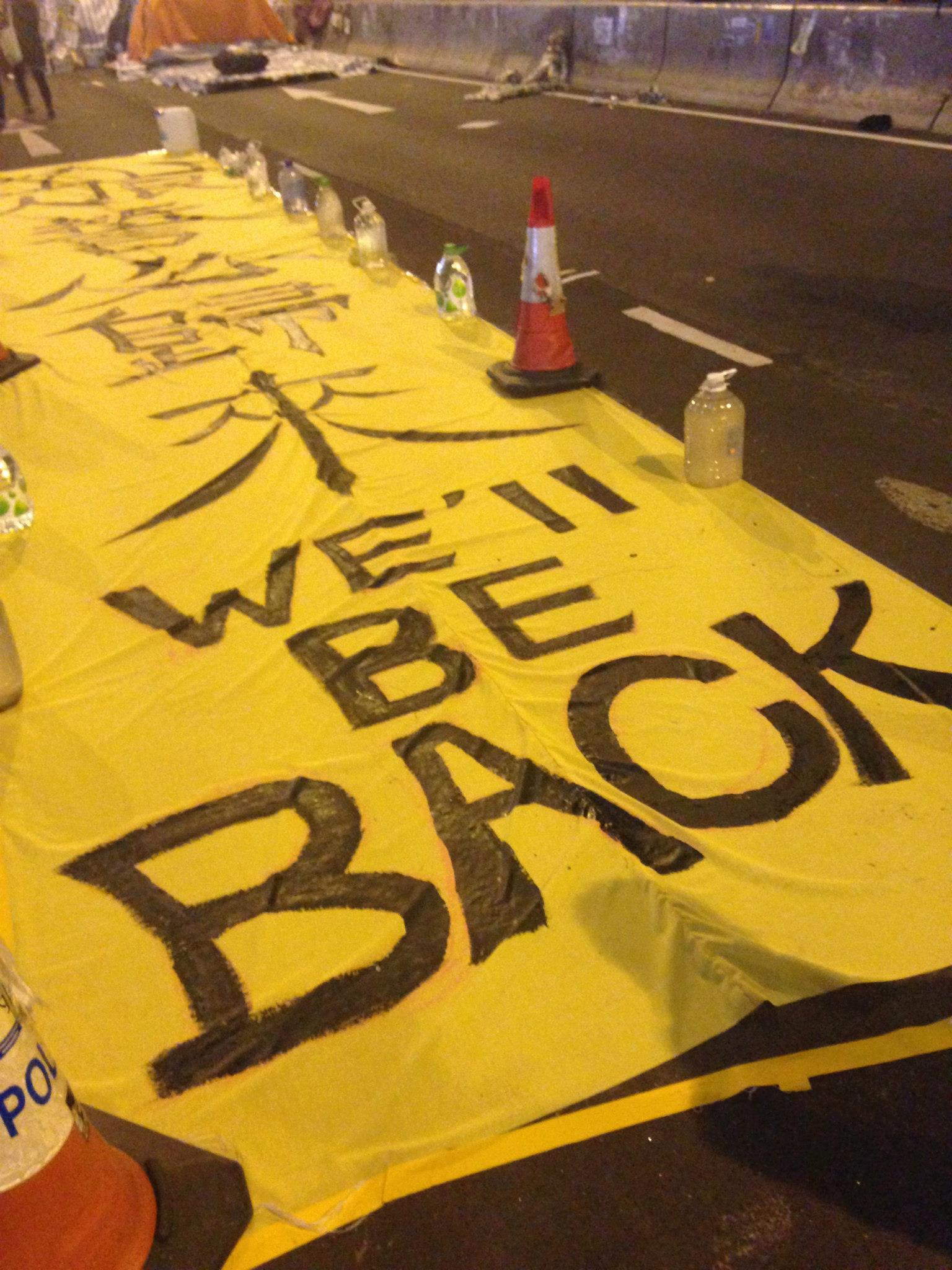 The Occupy organizers, students, and almost everyone HRIC spoke with, recognized this imperative: they must and will persevere, and that achieving a democratic future will require long-term commitments.  As one yellow ribbon maker in Admiralty said: “A democracy movement can’t happen in an instant—we need to carry on. . . . We are very confident.”

This issue of China Rights Forum, which builds on and grows out of HRIC’s existing special action page on Hong Kong, aims to support the ongoing movement through diverse views of the Movement’s participants in video and text, critical analyses of lessons learned and the implications for future strategies, documentation of the art work that emerged, and HRIC’s international policy advocacy. Below is a list of the contents of this issue.

This issue of the CRF is dedicated to the people of Hong Kong.